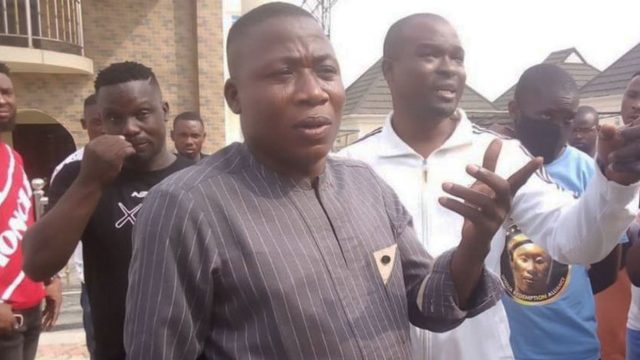 The residence of Yoruba rights activist, Sunday Adeyemo,(a.k.a. Sunday Igboho), in the Soka area of Ibadan, Oyo State, has been allegedly attacked by soldiers.

“I can confirm that those who came are definitely Nigerian soldiers,” Igboho’s spokesman, Olayomi Koiki, said in a Facebook Live chat. “There are more than 100 soldiers that came.”

Koiki claimed some soldiers invaded the house around 1am on Thursday.

“The situation is very active as more security operatives in about seven Nigerian Army patrol vans have arrived,” Koiki said. “He (Sunday Igboho) is currently safe.”

Some of the occupants of the house were said to have been whisked away by the invaders who were dressed in military camouflage.

Igboho’s Ibadan residence was first reportedly attacked in January 2021 after he issued a seven-day ultimatum to killer herders in the Ibarapa area of Oyo State.

He accused the herders of being culpable for the kidnappings and killings that happened in the town.

Igboho led a group of people who chased the herders out of Igangan at the expiration of the ultimatum. They ejected the Fulani leader of Igangan, Salihu Abdukadir.

He accused the Fulani leader of harbouring criminal herders who were kidnapping and killing residents of the community.

Abdukadir denied the allegations, stating that some members of his community have also been victims of the attacks and kidnappings trailing the community.

Some houses and cars were burnt in the process of evicting Abdukadir from the community.