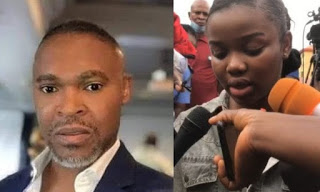 The Police in Lagos State has hailed the detectives that tracked Chidinma, the suspect accused of killing the Chief Executive Officer of Super TV, Usifo Ataga.
The Police, on Wednesday, paraded Chidinma Adaora Ojukwu, 21, a student of the University of Lagos (UNILAG). She narrated how Ataga, 50, was killed.
Items found with her included an International Passport, a fake driver’s license, a National Identification Card, a UNILAG identity card, among others.

Public Relations Officer, Muyiwa Adejobi attributed the timely arrest to the new strategies injected into the security system of the state.
Adejobi said the command had adopted scientific and forensic measures of unravelling crimes and criminality in Lagos.
He recalled that the Commissioner of Police, Hakeem Odumosu recently established the ICT/Tracking Unit at the Criminal Investigation Department, Panti, Yaba.
21-year-old UNILAG undergraduate arrested for murder of Super TV CEO

The unit, named D23, is headed by SP Kasumu Rilwan, a computer scientist.
“The unit has been instrumental to many feats recorded by the command, including the arrest of the prime suspect in the alleged murder of Michael Usifo Ataga, one Chidinma Adaora Ojukwu.”
Adejobi added that Odumosu also created the Special Squad and the Strike Team to complement existing department and units.
“The new squads have played many roles in suppressing and keeping criminals and hoodlums at bay in Lagos State,” the spokesman added.