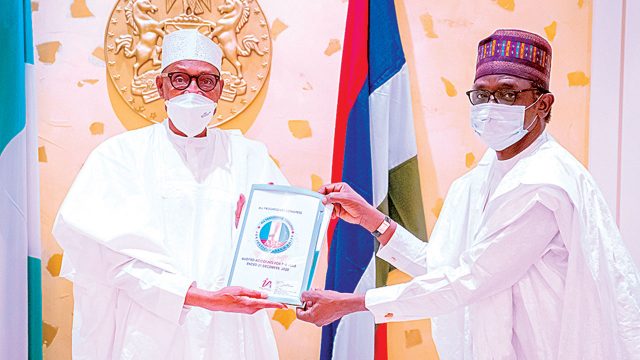 President Muhammadu Buhari has extended the tenure of the Governor Mai Mala Buni-led National Caretaker Committee of the All Progressives Congress (APC) by another six months.

The decision was taken at a closed-door meeting between President Buhari and members of the caretaker committee at the Presidential Villa, Abuja.

The development came after consideration of the progress report, the schedule of outstanding activities with regard to congresses, national convention and the forthcoming Anambra State governorship election.

A statement by the secretary to the caretaker committee, Mr John Akpanudoedehe, disclosed that the President also approved the timetable for APC ward, local government and state congresses scheduled to hold on 24th July, 2021, 14th August, 2021 and on 18th September, 2021.

The last meeting of the party’s National Executive Committee (NEC) conferred on the Caretaker/Extraordinary Convention Planning Committee (CECPC) the power of the national convention which is in line with powers provided in Article 13:3 of the APC’s constitution.

The party added that the tenure of the caretaker committee at each level would end immediately elections are held at that particular level and its new officers take oath of office, terminating with the national convention.

At the meeting, the CECPC national chairman expressed profound gratitude of members to Buhari and members of the National Executive Committee (NEC) for the trust, confidence and opportunity given to them to serve the party.

Buni informed the President that the CECPC had, during the period under review, led the party to contest in several elections and by-elections with overall success rate of 95 per cent.

On the peace and reconciliation efforts, the CECPC boss informed the President that the committee commenced its assignment with a desire to foster genuine reconciliation on solid foundation by giving all issues and every aggrieved member fair hearing and objectively placing party interests above individual interests.

“Your Excellency, with your excellent leadership roles for the party, we are witnessing high-powered defections, including serving governors from the Peoples Democratic Party (PDP) to our great party. It is also interesting to note that the fortune of the party in the last year has greatly improved across the country, and especially in the South-East, which has been the stronghold of the opposition.

“I am pleased to state that the party is now more peaceful, more accommodating, and more united with greater prospects than when we came on board.”

While welcoming members of the CECPC to the meeting, President Buhari promised to leave a legacy of transparency and fairness, which APC needs to survive. He said the APC had been energised and repositioned for its national convention and future elections.

The meeting coincided with the presentation of Senator Peter Nwaoboshi, by the Deputy Senate President, Ovie Omo-Agege, as a new decampee to APC.

The President noted that the fortunes of the party had been brightened by the re-organisation and reconciliation of members across the party.

“With the work done by the committee, APC has bounced back to life. I have listened with great interest to the remarkable job you have done so far. We are all witnesses to the crisis that engulfed the party leading to litigations and presented a picture of selfishness and division,’’ Buhari said.

He noted that the party structure was disturbed by the conflicts that preceded and followed various elections, adding that the secretariat had been witnessing a beehive of peaceful activities after the reconciliation.

admin5 hours agoJuly 24, 2021
24
Secret meetings have commenced between the Abdulaziz Yari led (perceived faction) of the APC in Zamfara and the Gov. Matawalle’s...

admin13 hours agoJuly 24, 2021
27
Justice Obiora Egwatu of the Federal High Court in Abuja on Friday has transferred the impeachment process of the Deputy... 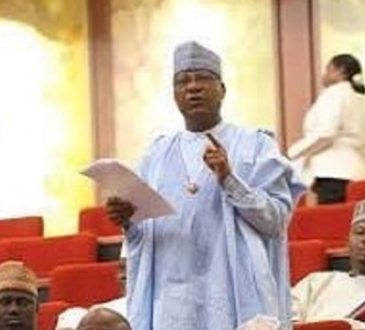