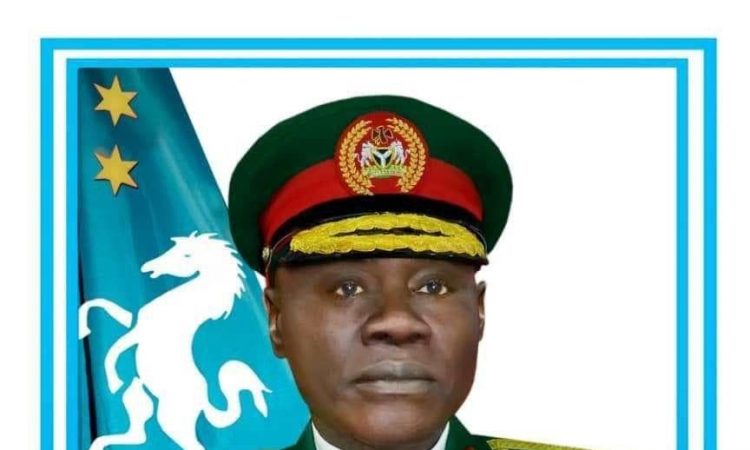 Yahaya who was appointed by President Muhammadu Buhari on Thursday becomes the 22nd Chief of Army Staff.

Earlier he visited the Chief of Defence Staff, General Lucky Irabor at Defence headquarters where the CDS congratulated him and presented to him, the Army Flag.

After the initial welcome ceremonies at Army headquarters of lowering the former flag of His predecessor and hoisting the New flag, the New Army Chief addressed senior officers of the Nigerian Army at the conference room of Army Headquarters in a closed-door session that lasted about ten minutes.

Before the closed-door session, he directed All senior officers present to observed a one minute silence for his predecessor Lt Gen Ibrahim Attahiru who died in a plane crash on May 21, 2021.

During his visit to Defence headquarters, the CDS wished Maj Gen Yahaya a successful tenure in office as the 22nd Chief of Army Staff.

General Irabor further urged the new COAS to build on the legacy of his predecessor, particularly in the fight against insurgency and banditry.null

The COAS was accompanied on the visit by the Chief of Policy and Plans Headquarters Nigerian Army, Maj Gen Benjamin Ahanotu.

Meanwhile, the Minister of Defence, Maj Gen Bashir Salihi Magashi (retd) has commended President Muhammadu Buhari for the well thought out Strategic appointment of Major General Farouk Yahaya as the 22nd Chief of Army Staff as a replacement for the late Lt Gen Ibrahim Attahiru who died in a plane crash alongside ten others last Friday in Kaduna.null

General Magashi said by the appointment of General Yahaya, President Buhari has expediently put national interest above ethnic and religious chauvinism by fulfilling all requirements necessary.

These include his unblemished track records of service, Professional, Command and Operational competencies among other yardsticks that culminated into his emergence as the most suitably qualified new Army boss.

General Magashi described the new Army Chief as an organic infantry General who is tested and trusted to actualise the national aspirations to restore peace in the dark spots areas of insurgency, kidnapping and banditry as well as other allied threats to the nation’s corporate existence.https://07c7a85c51a11b50363b094f3f91fdb4.safeframe.googlesyndication.com/safeframe/1-0-38/html/container.html

The Defence Minister expressed optimism in the professional pedigree of the former theatre Commander Operation “Hadin Kai” General Yahaya in sustaining the trajectory of taking offensive and aggressive campaigns to the camps, corridors and cells of the adversaries with a view to obliterating them.

He said as a battle Commander with remarkable exploits and considerable experience, exposure and expertise he will be committed to the new battle plans and philosophy of Jointness among Services and other security agencies in combat which are some of the legacies of his predecessor.https://07c7a85c51a11b50363b094f3f91fdb4.safeframe.googlesyndication.com/safeframe/1-0-38/html/container.html

While pledging the support of the Ministry of Defence under his watch to the new Army boss in carrying out his mandate, the minister said plans are in the pipeline by the Federal Government to immortalise late General Attahiru and others who died in the plane crash.

This according to him is aimed at immortalising them and to ensure that their sacrifices as national heroes in keeping the nation safe and secured are not in vain.

admin5 hours agoJune 19, 2021
23
Angry residents of Anguwar Magaji in Chikun Local Government Area of the state, have blocked the ever-busy Kaduna-Abuja highway in...