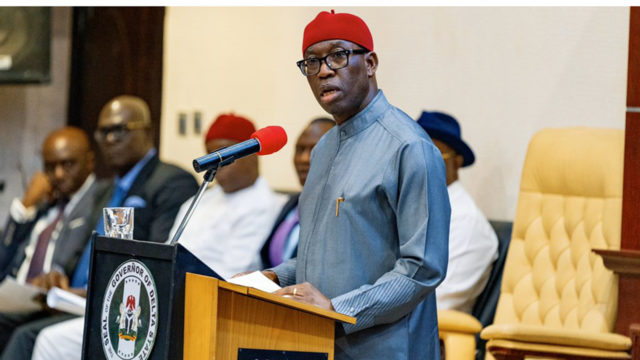 Delta State Governor Ifeanyi Okowa, has said Nigeria needed a new constitution, as against the amendment of the 1999 Constitution (as emended) to accommodate emerging issues of good governance for the greater interest of all Nigerians. He stated this when Senate Sub-Committee on review of 1999 Constitution met yesterday in Asaba, the state capital.

Okowa, who expressed concern over the constitution, said a new constitution for the country had become necessary in view of inherent flaws in the 1999 Constitution.

He, therefore, advocated the insertion of a clause to pave way for a rewritten constitution, which would continue to be in operation until a fresh one was ready.

“No doubt, there is still a lot to work on in our constitution to have a near perfect document and I know that the National Assembly has continued over time to ensure some of the amendments.

“It’s good enough that those sent here are familiar with the zone. So, when the people speak, they would understand.

“But, I also wished that some persons from other zones actually had the opportunity to come here and hear the voices of our people directly, because sometimes we do not understand the extent of the pains that the Niger Delta people truly suffer in the country.

“We believe in one country and in the unity of Nigeria, but we will continue to ask for equity as a people, and I know that the people will give their opinion at the public hearing,” he stated.

He lamented that the revenue allocation formula had not been reviewed for the last 24 years, whereas it was supposed to be reviewed every five years.https://2fe6d9a14d1c14f1120ba89ba911e4b5.safeframe.googlesyndication.com/safeframe/1-0-38/html/container.htmlnull

Okowa noted that oil-producing states had continued to struggle for the 13 per cent derivation fund, adding that oil was a wasting asset, while the environment where it was being extracted had continued to be polluted and degraded.

Senator James Manager, who led the committee, said the Committee, which comprised senators from Edo, Bayelsa and Delta, visited the state for a two-day public hearing on the amendment of the 1999 Constitution. He said apart from spiritual books, the constitution was the most important book in any country.

“The National Assembly alone cannot amend the constitution, because it involves states’ Houses of Assembly and other stakeholders. The document is never a perfect one and therefore, amendments are inevitable from time to time and fine tuned to reflect current realities,” he added.