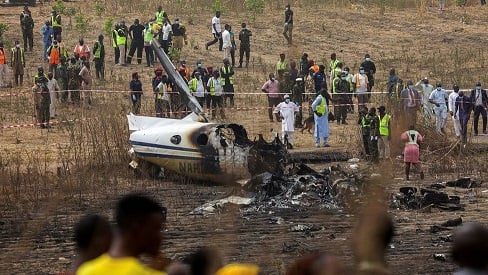 There is growing concern over the rate of plane crashes involving military aircraft in recent times.

This has raised deep concerns over the state of military aircraft and the experience of the pilots.

It will be recalled that the Nigerian Air Force had winged over 118 , pilots since 2015.

Meanwhile, on February 20, a Beechcraft KingAir B350i aircraft on reconnaissance mission crashed while returning to the Abuja airport after reporting engine failure en route to Minna, killing the seven personnel on board.

On April 1, a NAF Alpha Jet with two crew members disappeared from radar and has not been found.

Also on Friday, May 21, another NAF aircraft crashed near the Kaduna Airport, killing everyone on board.

But top military sources, said there was nothing unusual about the air crashes.

A senior NAF officer who didn’t want to be mentioned, said military planes in other countries also crash, adding that there is no need for conspiracy theories.

According to him, “In America military planes do crash, as well as in other countries. These are piece of machines that you cannot have absolute control over. So there is nothing unusual about the rate of plane crashes involving NAF aircrafts. We are all saddened about the incidents and pray it doesn’t happen again.”