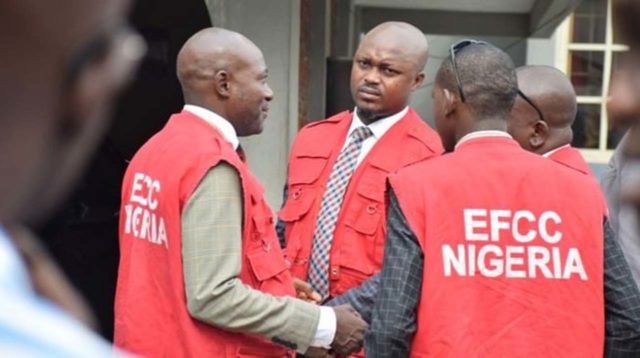 •Asks NGOs, CSOs to respect financial transaction rules
The Economic and Financial Crimes Commission (EFCC) has warned Nigerians against what it described as any investment that promises returns that looks too good to be true.

“Though risk-taking is considered by some as the oxygen that drives investment decisions, the commission warns the public against taking unmitigated risk in desperation to earn a windfall.

“Investment in Bitcoin, for instance, is a high risk activity as the terrain is largely unregulated, and prone to fraud,” the anti-graft agency said.

EFCC spokesman, Wilson Uwujaren, who gave the warning in Abuja, said the commission was alarmed at the rate Nigerians send petitions to the anti-corruption agency on fraudulent investments that promise high return with little risks to investors.

According to EFCC, Nigerians are losing, money to Ponzi schemes, forex trading and most recently, Bitcoin trading, compounding the nation’s economic woes.

To the EFCC spokesman, the trend indicates that investment scams continue to thrive despite enforcement and public enlightenment interventions by the commission and other stakeholders.

“While EFCC will continue to investigate and prosecute persons complicit in fraudulent investment schemes, it is incumbent on the investing public to be circumspect in their investment decisions..”

MEANWHILE, EFCC has reminded civil society organisations (CSOs) and non-governmental organisations (NGOs) that it is mandatory to report to the Special Control Unit against Money Laundering (SCUML) any transaction through any formal financial channels in excess of $10,000 and any cash donations in excess of $1,000.

The Head of EFCC, Lagos Zonal Office, Ahmed Ghali, who stated this in Ikeja, Lagos at a seminar jointly organised by Economic Community of West African States (ECOWAS) and Inter-Governmental Action Group against Money Laundering in West Africa, (GIABA) warned that “failure to do this is punishable by the law.”

Delivering a paper entitled “The Role of NGOs and CSOs in Countering Terrorism Financing in Nigeria”, Ghali warned that the law would not spare any such group that allows itself to be used as a tool for perpetrating money laundering or terrorism financing in Nigeria.

“The varied funding sources and the ability of NGOs and CSOs to process large amounts of cash to beneficiaries and regularly transmitting funds between jurisdictions make them prone to money laundering and financing of terrorism,” the EFCC official said. According to him, both the CSOs and NGOs have critical roles to play in curbing money laundering and terrorism financing in Nigeria.