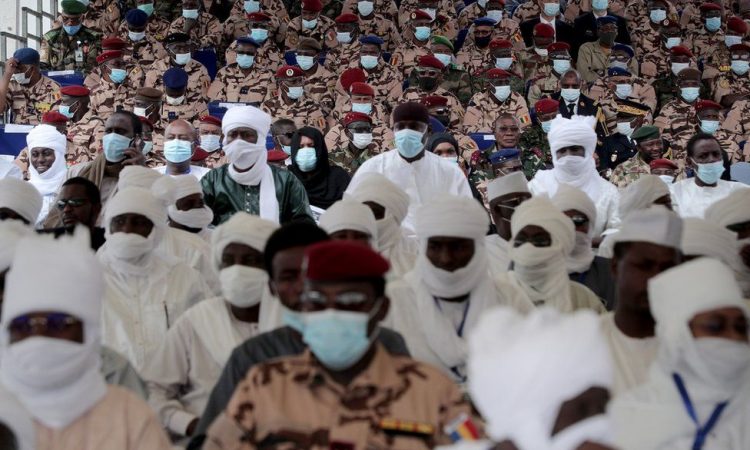 A funeral ceremony for late President Idriss Deby is being held in Chad capital Ndjamena with thousands of people paying their respect to the leader who was killed while leading his troops against a rebel offensive on Monday.

French President Emmanuel Macron, Guinean President Alpha Conde and several other African leaders were expected to be present at the ceremony on Friday, despite rebel warnings they should not attend for security reasons.

Macron vowed on Friday support for the country’s “stability and integrity”, but also urged his military successors to steer a smooth return to civilian rule.

Al Jazeera’s Hiba Morgan, reporting from the capital, said there was heavy deployment of troops amid concerns over security in the region and in the country.

“Since Thursday, there was a deployment of troops in the streets and around the presidential palace as well as tanks to seal the major roads ahead of the arrival of heads of states,” she added.

Chad’s armed forces stunned the nation on Tuesday by announcing that Deby had died from wounds suffered while leading soldiers on the front line against rebels advancing from the north towards Ndjamena. He was 68.

Deby ruled Chad for more than 30 years and was one of Africa’s wiliest political survivors, holding on to power despite rebellions that reached as far as his palace gates.

Hailing from the Zaghawa ethnic group, he grew up in the northeastern region of Ennedi. He joined the army in the early 1970s, at a time when Chad was gripped by a long-running civil war, and received additional military training in France.

Deby rose to the rank of commander-in-chief of the armed forces and eventually came to power by spearheading a 1990 rebellion that overthrew authoritarian leader Hissene Habre – his one-time mentor.

He officially took office in February the following year, and went on to win elections in 1996 and again in 2001 before pushing through a constitutional change in 2018 that could have allowed him to stay in power until 2033.

Although criticised by human rights groups for his repressive rule, he established himself as a key military ally of Western powers in the international fight against armed groups.

“He liberated our country from dictatorship and gave us the opportunity to participate fully in democracy,” said Emmanuel Gaba, a young resident of the capital.

His death came a day after election officials said he had won a sixth term in office. Most of the opposition boycotted the vote. Now his son, General Mahamat Idriss Deby, 37, will lead a transitional military council for the next 18 months.

“He protected us for so long that today we have come to wish him eternal rest. A deserved rest,” said Hassan Adoum, who attended the ceremony.

On Thursday, a car with mounted speakers drove around Ndjamena telling residents not to panic if they hear cannon fire as Deby would receive a 21-gun salute.

Ogunleye1 day agoOctober 24, 2021
389
Dori, Burkina Faso – Lying concealed atop his bus while watching armed men murder people below, the only thought that brought...