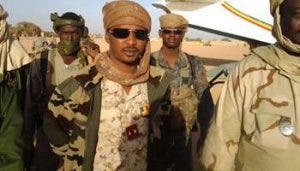 The military plans to publish a “transitional charter” soon.

Chad declared a two-week national mourning period after the president’s death and imposed a curfew from 18:00 p.m. local time until 05:00 a.m.

In addition, the military decided to close land and air borders “until further notice.”

The AFP reported earlier in the day that Deby, who commanded an army unit during hostilities against the rebels in Chad’s north, died.

A source confirmed to Sputnik that the president was critically injured during the clashes and died later in a hospital.

Mahamat previously served as the second in command of the Armed Forces for the Chadian Intervention in Northern Mali (FATIM).

On Feb. 22, he led his army against rebels in the Adar al-Ifoghas mountains in Northern Mali leading to the Battle of al-Ifoghas.

They eliminated a rebel base said to be of “significant importance”, inflicting heavy losses upon the rebels but also losing twenty-six men in the process, including Abdel Aziz Hassane Adam, a commander of special forces.

Mahamat took full command of the FATIM and has since been leading operations against rebels in the North.