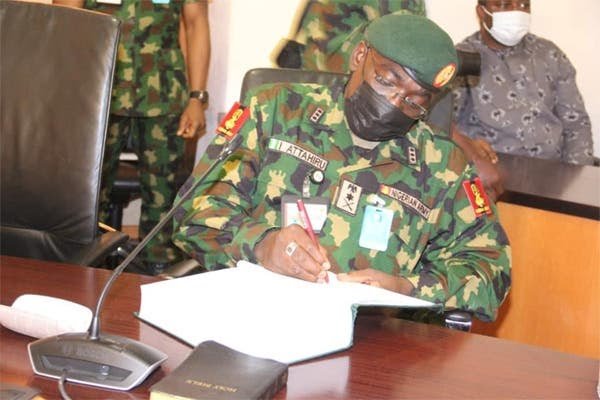 The Chief of Army Staff (COAS), Lt.-Gen. Ibrahim Attahiru, has told the House of Representatives Ad Hoc Committee investigating the Purchase, Use and Control of Arms, Ammunition and Related Hardware by Military, Paramilitary and Other Law Enforcement Agencies in Nigeria to invite his predecessors to shed more light on the arms procurement.

Attahiru stated this on Monday, in Abuja when he appeared before the Ad hoc committee investigating arms purchase in the last ten years.

Attahiru said he was earlier invited to before the Committee but was unable to make due to exigencies of duties, adding that he was either in the North-east or South-east or South-south trying to ensure stability within Nigeria.

But Ejiofor Oghene, who was not pleased with the explanation given by the army chief, asked him to apologise for not honouring the invitation extended to him earlier.

He pointed out that everybody in any position of authority works for the Nigerian people while adding that elected officials are those who speak for the 200 million or more Nigerians.

Oghene stated: “The explanation all along is understandable considering the security situation in the country and knowing that your position demands a lot of your time going around. So, one would have expected that today that you are able to honour this invitation, there would have been something that sounds like an apology for not being able to make it all along. What we have gotten is an explanation.”

The lawmaker insisted that the House symbolises the Nigerian people and therefore demanded that Attahiru apologised for not honouring the earlier invitation.

But the combat-ready army chief stood his ground, saying his explanation was as good as an apology.

Attahiru said: “Mr Chairman, just like the last speaker, said that we are partners in progress and I believe that too. But you said I offered an explanation, it is as good as an apology. It only tells you the reasons I was here and the reasons are cogent enough, even the blind man knows there are problems of internal security in Nigeria. So, I think it suffices to explain to this honourable House my inability to be here.

However, Bede Uchenna, who re-echoed the position of another member of the committee, said after the submission of documents to the Committee, it behoves on the COAS to speak to the document before the committee members start asking questions on areas they need clarification

But the army chief explained that the executive summary of all the documents demanded by the committee is self-explanatory, while the issue of procurement which is of interest to the committee has also been dealt with.

Attahiru added: “The summation before you speaks to the report before you, it is an executive summary, it is self-explanatory…because when you demanded this report you stated specifically the areas from which you wanted this report.

“You may wish to recall that the COAS took over the mantle of leadership barely two months ago. The period from which you wanted this report, having been summarised in the Executive summary explains whatever details you will require. Issues of procurement that you so demand to know were done by specific individuals.

“I will rather you call these individuals to come and explain to you very specific issues. The general issue has been contained in the report and the summary and the other executive summary is so contained, it goes to speak about the entire report and it explains it.”