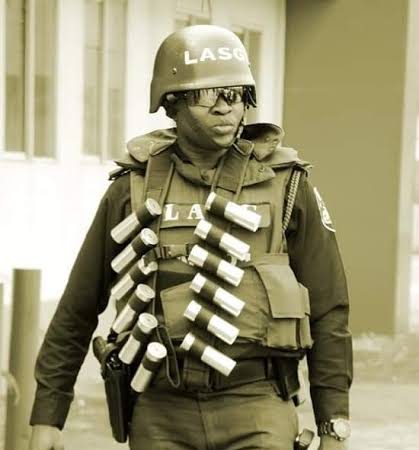 The elevation of Chief Supretendent of Police, Saheed Olayinka Egbeyemi from the position of chairman, Lagos State Task Force on Environmental and Special Offences (Enforcement Unit), a.k.a TASK FORCE, to the Commander of the Rapid Response Squad (RRS), Lagos state, is no doubt a validation of the truism that, integrity, professionalism, loyalty, precision, steadfastness and caring less about whose ox is gored when executing one’s mandate as a public servant and or a trusted personnel in the private sector, remain the sure bets and recipe for measured and assured success, if truly and passionately held on to through thick and thin.

CSP EGBEYEMI’s recent raise to a higher calling also aptly authenticate the immortal twosome submissions that, there is nothing like “SOMETHING FOR NOTHING”, because life is and provably so too, ” WHAT YOU GIVE IS WHAT YOU GET”; there exist a price for every bit of success and no questions about that.

CSP EGBEYEMI’s exploits in the Nigerian Police Force paints an impressive resume, dating back to his first major calling at Aguda Police station, Surulere, Lagos as a traffic officer , while still freshly out from the Police Academy (POLAC), wudil, Kano for his mandatory one year attachment.

He was at different times, administrative officer at Elere divisional headquarters, Agege, crime officer 1, at Alausa division, Ikeja, he was deputy police public relations officer (DPPRO), Lagos state command, he was a personal assistant and later officer-in-charge (OC), DC Secretariat, state CID, Panti, yaba, he was staff officer to former IGP, Mike Okiro, he was, Unit commander, Mopol 20, he was ADC to erstwhile Ogun state governor and now senator, Mr Ibikunle Amosun, he was Area crime officer, Area G command, Ogba, he has been divisional police officer in charge of Mosafejo division in Oshodi, Aguda division in Surulere, Ilupeju division in Mushin, all in Lagos state and not forgetting his remarkable spell too, as DPO, Sango Otta division in Ogun state from where he was poached for the Lagos state task force job; all of these, representing essential and critical on the job experiences ganered within the span of a decade and half.

The new RRS Commander also has baggages of certification in courses and trainings from within and outside the shores of Nigeria, a few of which include, peace support operation and anti-terrorists course at the prestigious centre of excellence for stable police unit (COESPU), in Italy, combat craft operation in Gwoza, Borno state, eadership and citizenship training at Shere Hills, Jos Plateau state, Anti Boko Haram/ Terrorists operations with Joint Task Force in Potiskum, Yobe state and in Kano state in 2012 and 2014 respectively.

Diploma in National Security from Galilee international management institute, in Israel, he was a participant at the south west regional security management course (SWRSMC), initiated by the Nigeria Defence Academy (NDA) and the office of the special adviser to the Lagos state governor on security and intelligence.

CSP EGBEYEMI, is a member of numerous professional bodies and associations locally and internationally amongst which is, international association of chiefs of police and has attended the body’s conferences a number of times in Philadelphia, Florida, Chicago and San Diego in California, U.S.A.

His sojourns across all the various capacities mentioned earlier are marked with indelible landmark records and accomplishments that include scuttling numerous robbery attempts across divisions; the arrest of one Bolaji Oyekanmi, that belongs to a syndicate of specialized robbers, who rob cash in transit vans during his time at Ilupeju division which led to the recovery of foreign currencies in dollars and pound sterlings worth $118,000 and #50,000, stolen from a bullion van belonging to bankers warehouse, is a highpoint; the recovered foreign currencies were promptly delivered to the owners, bankers warehouse who were generally marvelled at the untampered sums and they all termed the act and feat by CSP EGBEYEMI, as uncommon even as they showered encomiums on the super cop and his men for the historic heroic.

His exploits pushed him to staggering heights of recognition and appraisals by key decision makers across public and private sectors and when in March 2016, while still the divisional police officer at Sango Otta police station, the executive governor of Lagos state then, His Excellency Mr Akinwunmi Ambode preferred and fingered him for the Lagos state Task Force stewardship, it was great news albeit a deserved reward for a silent but a goal getter of a police officer, amply been followed by shot callers in the corridors of government and the likes.

After his assumption of office at the Lagos state Task Force, he immediately hit the ground running, making civility, precision and resultfulness, the hallmark of the new times; the tales of the unparalleled strides, the agency under his stewardship has made is right at every discerning Lagosians fingertips.

It is noteworthy that, CSP EGBEYEMI, turned around the overall orientation and operations of the agency to sync with the modern security realities; personnel kittings were given a prior place to reflect digital realities; operational gadgets were also given high rate priority; training and retraining was an A-listed priority too.

No wonder, the agency became a brand and a household name in Lagos, identified with no nonsense approach to the application of it mandate with relentlessness, precision and the human face required, in line with extant enabling laws of the state of Lagos.

The agency as the name goes, is saddled with the responsibility to enforce untinkered compliance with the environmental and traffic laws; dwarf special offences and other exigencies as may be ordered by the executive governor of the state of Lagos and it is evidently agreeable by all and sundry that, the task force brought respite to law abiding Lagosians with it relentless and professional mitigation of disorderliness of all sorts under it purview.

The agency under CSP EGBEYEMI, became a thorn in the flesh of recalcitrant traffic offenders amongst private and commercial motorists and motorcyclists in Lagos; the task of mopping up Lagos of traffic and environmental mess, herculean as it is, with all the humongous occupational hazards, came under sterling control with the unrivalled prowess of CSP EGBEYEMI; fifth columnists were always at their mills to smear, bad-mouth and clog his wheels but he remained fearless, unbiased and relentless with an eyes on the goal charge always which unarguably is responsible for the staggering gains and successes recorded at the agency to date.

Worthwhile achievements recorded during and post the #EndSars protests which went berserk with the better forgotten unprecedented brigandage witnessed in Lagos state, will remain evergreen and a cause to reference, tossing egbeyemi’s name high for sticking his neck out for a Lagos with law and order holding supreme rather than the anarchy targeted by the enemies of the state and our country Nigeria, damning the hazard to his person and family bearing.

As we are all aware and witnesses to negative returns from the ill-intentioned protests, the Nigerian Police suffered colossal damage in unprecedented desecration with lives of over 20 policemen lost to gruesome murders, large scale arson, destruction of formations and lootings of police arms and ammunitions across the state.

The immediate effects of the #EndSars protest on the police force, was a total loss of morale, apathy and a general letdown spirit in the force across the nation; it took the IGP’s concerted efforts in touring across the country to motivate and reawaken the spirit of commitment and nationhood in the personnel.

The IGP’s efforts yielded very unsatisfactory result as police personnel noticeably disappeared from the public space and citizens were at the receiving end with high crime rates of all class; save our soul (SOS), calls by citizens became the anthem around the country.

Uncomfortable with the prevalence of anomalies and the increasing complaints of Lagosians over the security breaches, CSP EGBEYEMI, primed his men for sustained onslaught and arrest of the messy security situation in Lagos and launched to action, hitting hard at miscreants, cultists, hoodlums and their likes unleashing terror on the state and his resolute and fearless audacity started paying dividends as series of daredevil operations kept been busted and traffic offenders made to face full extent of the laws after arrest; his efforts further yielded the recoveries of looted police arms and ammunitions from some of the divisions especially Isokko’s in Agege.

A worthy feat that keen followers and observers of security and general events in Lagos overwhelmingly agree and commend CSP EGBEYEMI for, is the undisputable fact that, the boldness, audacity and professionalism, he relaunched his men back to the public space to re-establish order in the state, despite the daunting realities sequential to the protest winds, have achieved two significant things; sanity gradually returning to Lagos and the police in Lagos have had their confidence buoyed, resulting in their return to the streets to do their jobs as noticed all over the state.

The erstwhile task force chairman boast of sterling qualities uncommon amongst his equals and it is only a matter of time, he rises to the pinnacle of his chosen career.

CSP EGBEYEMI, is a proud Owu prince and a galant Lagosian from the great Isale Oja area of Agege, Lagos state; he models true Nigeriannism as his acquaintances cut across the regions of Nigeria with positive appraisals on the lips of everyone.

He is a humanitarian with midas touch; he has and continue to empower and engage able bodied youths, physically challenged persons, destitutes and many other classes of less privileged individuals.

His assumption of the driving seat at RRS promises to raise the bar at the agency and this is assuredly true, judging by his past exploits, wealth of experience and the striking uniqueness he is endowed with; no doubt, Lagos state security is in the right hand and set to experience a new and improved lease in rapid response to security challenges and solutions. Bravo and welcome on board, the new Sheriff at RRS LAGOS