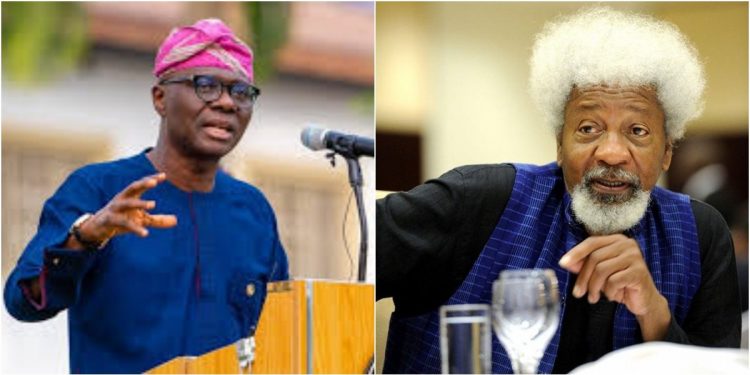 Nobel laureate, Prof. Wole Soyinka on Wednesday said his enquiry so far indicated that Governor Babajide Sanwo-Olu did not invite the army to shoot at #EndSARS protesters in Lekki.

Soyinka, who condemned the shooting of the protesters in Lekki said the governor did not also complain of a breakdown of law and order in the State.

He said the centre has chosen to act in an authoritarian manner and has inflicted a near incurable wound on the community psyche.

In his words: “It is absolutely essential to let this government know that the Army has now replaced SARS in the demonic album of the protesters.

“My enquiry so far indicates that the Lagos governor did not invite in the Army, did not complain of a ‘breakdown in law and order’. Nevertheless the Centre has chosen to act in an authoritarian manner and has inflicted a near incurable wound on the community psyche.”

However, Soyinka asked State Governors where the Federal Government has deployed military to quell protests to demand their withdrawals now to avoid further escalation of crisis.

“At that earlier mention Lagos sector, Lekki, where most of the affirmative action gatherings had taken place, soldiers opened fire on unarmed demonstrators, killing and wounding a yet undetermined number. One such extra-judicial killing has drenched the Nigerian flag in the blood of innocents – and not symbolically.

“The video has, in accustomed parlance, ‘gone viral’. I have spoken by phone to eye-witnesses. One, a noted public figure has shared his first hand testimony on television. The government should cease to insult this nation with petulant denials,” he said.

“To the affected governors all over the nation, there is one immediate step to take: demand the withdrawal of those soldiers. Convoke Town Hall meetings as a matter of urgency. 24-hr Curfews are not the solution. Take over the security of your people with whatever resources you can rummage.

“Substitute community self-policing based on Local Councils, to curb hooligan infiltration and extortionist and destructive opportunism. We commiserate with the bereaved and urge state governments to compensate material losses, wherever,” he added.

Soyinka said to “commence any process of healing at all – dare one assume that this is the ultimate destination of desire? – the Army must apologize, not merely to the nation but to the global community – the facts are indisputable – you, the military, opened fire on unarmed civilians. There has to be structured restitution and assurance that such aberrations will not again be recorded.

“Then both governance and its security arms can commence a meaningful, lamentably overdue dialogue with society. Do not attempt to dictate -Dialogue!”