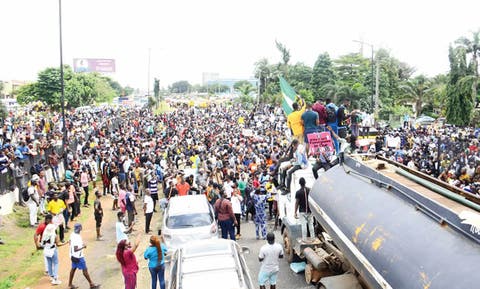 Feminist Coalition, a not-for-profit organisation and one of the leading supporters of the #EndSARS campaign, says it has received over N77m cash donations in favour of the ongoing protests against police brutality and extrajudicial killings by men of the now-disbanded Special Anti-Robbery Squad of the Nigeria Police Force.

The group, whose objectives include “fighting injustice through peaceful protests, fundraising, and social media organisation” disclosed this in a statement on Thursday titled, ‘Progress Report – October 15th, 2020’.

It said the funds were raised “through the generosity of well-meaning people and concerned Nigerians who want their voices to be heard and their demands to be met.”

The statement partly read, “Over the past week, there has been a peaceful uprising by the Nigerian youth, demanding for the disbandment of the notorious SARS unit, and the end to police brutality and an unjust judicial system.

“Like everyone else, we decided to play our part and help fight the injustice through fundraising in order to sustain the peaceful protests and ensure the safety of Nigerians exercising their civic rights – by providing food, water and other refreshments, masks, medical aid, and legal aid for protesters.

“With these funds, we have supported 100 peaceful protests in 25 states, paid NGN 759,080 in medical bills for injured protesters, donated NGN 400,000 to the families of victims murdered by police officers while protesting peacefully, paid NGN 500,000 in legal aid and spent N 11,367,500 on supplies including food, water, mask among other things for the peaceful protesters.”

The PUNCH had earlier reported that the founder of Twitter, Jack Dorsey, expressed support for the #EndSARS protests when he shared a tweet by @Feministcoalition which had how to make donations to the campaign.

Youths have been protesting against police brutality and killings for over one week, grounding economic activities in major parts of the country.

Ogunleye13 hours agoDecember 3, 2021
30
The establishment of special desk for Persons With Disabilities, PWD, is to begin across Nigeria following the approval granted by...

Ogunleye14 hours agoDecember 3, 2021
35
The Court of Appeal sitting in Akure, Ondo State capital, has discharged and acquitted the founder of Sotitobire Praising Chapel,...

Ogunleye15 hours agoDecember 3, 2021
31
South Africa is being hit by a fourth wave of COVID-19 infections driven by the Omicron variant which has been...