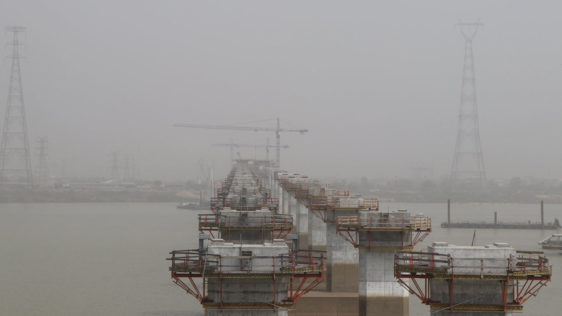 Anambra State Governor Willie Obiano yesterday blamed the slow pace of work on the 2nd Niger Bridge on River Niger’s high water levels. According to him, this is affecting the contractor handling the project.

Obiano spoke at State House, Abuja, where he sought President Muhammadu Buhari’s help for the 5,000 people displaced by floods in four councils in the state recently.

“If you watch from their side, you will see that almost half of that bridge has been done. But because the water level is very high, the contractor working on the bridge requires some equipment which they have already purchased long ago in Germany and requires some support from the Central Bank of Nigeria to be brought into the country,” he said.

“Four of my local governments out of 21 are under water now as we speak, because of flooding, and it affected a lot of things, including farm produce.”

The governor said he decided to seek the President’s assistance because of the effects of COVID-19 on the economy of his state. He expressed confidence that the Federal Government would complete the 2nd Niger Bridge project.

The governor said he briefed Buhari on the progress so far made on the project and that the President promised to do something about it.Obiano also said he discussed the sorry state of federal roads in the state with Buhari and requested him to include them in the 2021 budget.
He commended the President for the Zik Mausoleum that took 23 years to build, as well as work on the Onitsha-Enugu Expressway.

admin13 hours agoMay 15, 2021
25
The 2021 Unified Tertiary Matriculation Examination(UTME) has been moved from June 19 to July 3, Registrar of the Joint Admissions...

admin23 hours agoMay 15, 2021
40
The Attorney-General of the Federation and Minister of Justice, Mr Abubakar Malami, SAN, on Thursday, said the Federal Government would...

admin2 days agoMay 14, 2021
9
Former Governor of Oyo State, Rashidi Ladoja, has said that the northern part of the country is already taking action...

admin2 days agoMay 14, 2021
45
The Chairman, Senate Committee on Agriculture, Abdullahi Adamu (APC, Nasarawa), has accused the Southern Governors Forum of playing to the...